Bolton is a bustling village with a rich history in the Town of Caledon.

Its historic core is located in and around the intersection of Regional Highway 50 (Queen Street) and King Street. It is hard to believe that for thousands of years preceding settlement, the hills surrounding Bolton were inhabited by Native Canadians, who frequently passed through the area in their canoes.

The origins of this riverside community began in 1821 when George Bolton purchased 200 acres of land along the Humber River from surveyor James Chewett. George built a house, dammed the river and with the help of his older brother, Albion Township settler James Bolton, built a water-powered flour mill which was operating by 1824.  George’s mill gradually attracted other development and by 1840, Bolton boasted 14 houses, 2 stores, blacksmiths, a shoemaker, a tailor and a hotel.

Bolton Mill continued to prosper while enduring more than its share of floods and fires throughout its history. In 1872, it was decided that the village of Bolton should become its own entity and it separated from the township of Albion. As such, Bolton’s first village council was elected in January 1873 with Lambert L. Bolton as its head.

In the years that followed, Bolton was home to several prominent businesses including Walshaw Woollen Mills, The Toronto, Grey & Bruce railway station, The Bolton Foundry, The Albert Street School, The Enterprise, various hotels, The Imperial Bank of Canada, and many more.

Today, Bolton continues to attract new residents and businesses, and to forge its identity along the banks of the scenic Humber River.

1819 – Survey Albion Township: James Chewett completes the township survey and is paid with 2635 acres of land.

1819 – Settlement: One of the first settlers to Albion Township, James Bolton, arrives from Suffolk, England. His land grant of 100 acres is about 7 kilometres north-east of what is now Bolton. James becomes the patriarch of the Bolton clan in Canada which grew to include his younger brother George and sisters Maria and Rachel.

June 5, 1821 – George Bolton purchases a 200 acre mill site along the Humber River from surveyor James Chewett. This is the catalyst for the settlement that evolves into Bolton. See George Bolton’s full biography.

1823 – Bolton’s Mill Built: George Bolton with the guidance of his older brother James, relieves many settlers by building a dam and establishing a small grist mill on Lot 9, concession 7, Albion, the area now occupied by Mill Street in Downtown Bolton.

1824 – Flour Mill operating: George Bolton’s Flour mill is grinding wheat kernels into flour. The mill has one run of stone.

1831 – Settlement’s First Store: George Bolton builds the first store at what is now the NE corner of Mill Street at King

1840 – Samuel Sterne’s Hotel: The village’s first hotel with a large bar is operating on the west side of Queen Street on the site of what is now 56 Queen Street North. The structure was built from mud bricks.

1841 – Smithy and Inn: In 1840, blacksmith Elijah Harsent buys the settlement’s early blacksmith shop on Mill Street at Queen, the current site of Auto Block. Around 1841, he builds a small inn and tavern, what is today the Riverside Grill.

1845 – Bolton’s Mill Moves: George sells the mill property to his nephew, James Bolton Jr. He later moves the mill to a new site (what is now the corner of Humber Lea Road and King Street East.)

1847 – Hotels Built: The Exchange Hotel (located at the present-day Tim Horton’s) is built. After is destroyed by fire in 1881, it is rebuilt and expanded in grandeur with verandas on all sides. The building will be bought and sold several times in the years that followed, until its final demise in 1969 by fire.

1847 – The Brick-works: The brick-works is established by Matthew Grey on the south end of what is now David Street. It is later sold to David Norton (whom David Street is named for), and becomes Norton’s Brick-works.

1848 – Tavern Inn is built: James Johnstone builds a tavern and Inn on the south-east corner of King and Queen Streets (present day location of CIBC). By the late-1850s it is known as the Masonic Arms Hotel.

1852 – Brick Commercial Building: Callendar Brothers build a large brick structure at the Four Corners which becomes a dry good store. In later years (1932-33), the property is bought by C.A Leggett and eventually becomes Leggett & Smith drugstore. It later becomes Guardian Drugstore, which relocated in 2004 from the site to its present location at the Royal Courtyards, in downtown Bolton. The brick store is now a restaurant.

1854 – Drug Store: James C. Stork opens up a drug and seed store on the south-west corner of King and Queen Streets. In 1894, the building was moved to the next lot south where it still stands, now operating as Allegro Fine Food.

1857 – The General Store: Wyatt Jaffary partners with J. McIlroy to open up a small store at the northwest corner of King and Queen Streets (which at present day is the Bake Shoppe). The store boasts a telegraph office with the arrival of the railroad and receives daily weather reports from the central weather office in Toronto. The business is later owned in partnership by several individuals including Dan Fines, Alex Barry, Earl Small, and Teddy Houston.

1865 – Floods: A great flood ravishes the village which itself lies on a flood plain. It came as no surprise following a particularly harsh winter and extremely heavy snowfall.

1869 – More Hotels: The Ontario House Hotel is built on Queen Street North (on the site occupied by the old Main Street Station restaurant). The hotel is noted for its extremely good meals. It is owned and run by several individuals including a Mr. McKnee, Richard Beamish, J. Squires, T. Linfoot and W. Tedor Daniel Small, father of Ambrose Small, a Toronto millionaire who mysteriously disappeared, also owned it at one point. The hotel eventually burned down in 1916. The site eventually becomes Egan Hardware and Furniture, after sitting empty for several years.

1869 – More Growth: William Dick builds a large machine shop and foundry called William Dick Agricultural Works, which unfortunately burns down in 1878. Another one is built, but it too burns down. The TA Dick Garage is later founded at 44 Queen Street North (the building is currently occupied)

1870 – The Toronto, Grey & Bruce Railway: The first train runs from Toronto to Bolton at a whopping 25 m.p.h. Though the train made to transport grain and flour much easier and certainly contributed to the growth of Bolton, it was a mixed blessing; it also meant an outflow of business opportunities as commerce that could previously have been accomplished in Bolton was increasingly being done in Toronto. As such, there was a period of economic decline in the 1880s in part due to improved transportation.

1871 – Bolton’s First Newspaper: The Cardwell Observer, is published by J.N. Bolton. In 1886, the paper changes its name to The British Standard. In 1888, the business is sold to H.H. Bolton, who renames it the Bolton Enterprise and relocates to Queen Street North. In 1900, Future owner F.N. Leavens later moved the Bolton Enterprise to 50 Queen Street North. The printing plant has not left the Leavens family hands since 1900 and is today the oldest continuously run family business in Bolton.

1873 – Carriage-making at its Finest: Albert Dodds brings his carriage making trade to Bolton in 1873. The Bolton Carriage Works is located on the southeast corner of King and Eliza streets (now the site of the Royal Courtyards mall). The carriage works produces buggies of the highest quality and wins several prizes at township and country fair exhibits. The business is later bought by Mr. Egan in 1913.

1881 – McFall’s Flour Mill: The John Gardhouse Flour Mill is sold, by his estate, to Andrew McFall and is renamed as McFall’s Flour Mill. It was at that time capable of grinding 150 to 200 barrels of flour daily. McFall’s supplies flour to other towns as well as Bolton itself. In 1894, Andrew McFall dies and the business is taken over by his son, Arthur. The McFall family maintains ownership of the mill for 60 years until 1941 at which time it is bought and sold several times, until its dismantling in 1968. In order to provide practice for local firemen, the mill is intentionally set on fire before dismantling is completed.

1901 – Town Hall: The village purchases the former Primitive Methodist Church at the corner of King and Chapel Streets for its Town Hall. In 1906, a small jail is erected on the premises with two cells to house railway workers who celebrate too heartily on payday. The building serves as the Bolton Red Cross headquarters during WW1. The building burned down in 1920 and the current building was erected the following year.  Since then, the premises have operated as a movie house in the 1940’s and 50’s, a live theatre venue, and with many other functions. Town Council moved its chambers in 1967 to Mills Street, and since then the building has served as a sheet metal shop, a bicycle shop, and a fish-and-chip shop.

1905 – Farmers Market: Bolton establishes its first farmers’ market, which took place every Monday on the grounds of the Town Hall. Buyers were known to come from as far away as Toronto for fresh farm produce, poultry, cheeses and eggs. When the Bolton Market ceased to exist in 1927, it was greatly missed by citizens of Bolton and nearby communities. Throughout the years, the concept has been resurrected, and in 2004, a new Bolton Country Market featuring farmers produce, collectibles and craft vendors, is currently now being held at Royal Courtyards parking lot on King Street on Saturday mornings throughout the Summer.

1906 – Bolton’s First Bank: The Imperial Bank of Canada takes over the Balmoral Hotel located on the southeast corner of King and Queen Streets. The hotel is demolished in 1908 and the bank then builds Bolton’s first bank building. CIBC offices remain at that corner to this day.

1911 – More Floods: Flood follows another harsh winter – Bolton is completely underwater “from the mill to the hill”.

1912 – And Still More Floods: Flood occurs on April 7 following yet another harsh winter and raised water levels of the Humber River.

1954 – Hurricane Hazel Hits Bolton: Some of the worst floodings ever to hit Bolton occurs in the wake of Hurricane Hazel. It came without warning and left a trail of wreckage and destruction throughout the town. 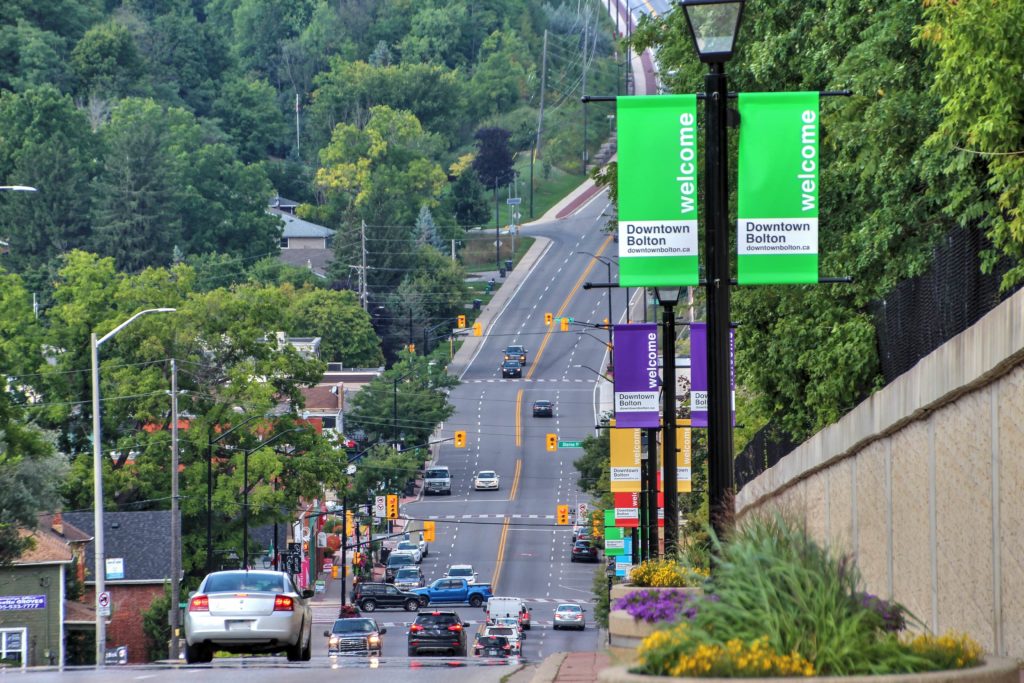 The BIA is happy to announce that we will resume the Downtown Bolton Market in 2022. View more details on our Market page. 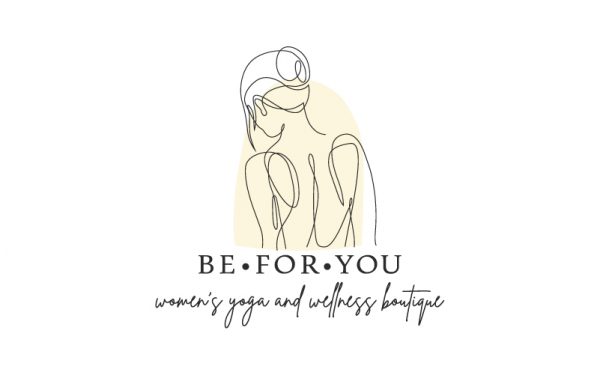